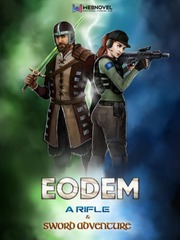 What is Eodem: a Rifle and Sword Adventure

Eodem: a Rifle and Sword Adventure is a popular web novel written by the author Hackata_48, covering ISEKAI, FANTASY, MAGIC, COMEDY, SCIENCE FICTION, ACTION, DUNGEONS AND DRAGONS, MEGACORPORATIONS, DECONSTRUCTION, REAL POLITIK, Fantasy genres. It's viewed by 553.6K readers with an average rating of 4.53/5 and 35 reviews. The novel is being serialized to 55 chapters, new chapters will be published in Webnovel with all rights reserved.

After a routine planet-fall on an Earth-like planet near the farthest recorded reaches of the frontier, a group of United Federation of Earth colonists looking for a new home has stumbled into a planet that is described as a "Fantasy World". Complete with dwarf, elfs, dragons, orcs, monsters and shockingly other humans, a brave Special Action Squad code-named 'Stryder Group' must survive in this new world with their guns, wits, genre savviness and a few good cans of Spaghetti sauce. A story inspired by Modern World meets with Fantasy World (like Gate, the Accident and Stargate) (Now a Webnovel Semi-Exclusive! Always 2 Chapters ahead of every other releases in Wattpadd and Spacebattles Forums. Catch the latest chapters here in Webnovel now!)