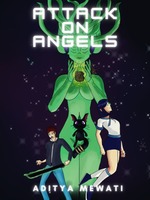 What is Attack On Angels

Attack On Angels is a popular web novel written by the author Katekichi, covering ACTION, ADVENTURE, COMEDY, SYSTEM, MAGIC, WEAK-STRONG, ACTION-ADVENTURE, SCIFI, SLICE-OF-LIFE-ISH, STRONG FEMALE CHARACTERS, Martial Arts genres. It's viewed by 6.4K readers with an average rating of 0/5 and 6 reviews. The novel is being serialized to 12 chapters, new chapters will be published in Webnovel with all rights reserved.

Before the naked green woman with tentacles for hair summoned him, Akira Ito always thought of himself as an ordinary boy with an average but difficult life. He didn't have parents, didn't know anything about them. But Akira didn't let that bother him. He had a beautiful and funny grandma who loved him like no one and never made him feel alone or different. Akira was happy--even after his grandma's death, he tried his best to live life the best way possible. But without his grandma to guide him, Akira felt like he was floating through the days. He had no idea what life had in the store for him. He had no idea that he would be soon joining a secret society and befriending some eccentric but fun people including a sarcastic cat, a hotheaded, mean but reliable girl. He had no idea that he would be setting out on an adventure across the galaxy to find the ancient relics and fight against some of the most overpowered beings in the whole Milkyway. Will Akira be able to master his newfound powers, get stronger enough to face his enemies, and complete the impossible quest that the green lady gave him? Cover Art Credit: To the writer himself. aka ME XD