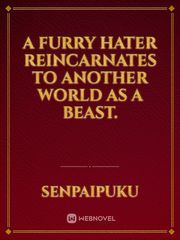 A Furry hater reincarnates to another world as a beast.

Haruki, a 28-years old adult that works in a normal advertising company. As a child, he loved anime and animals, but the idea of conjoining the two? Not so much. At first, he found it funny, but then, when internet sexualizing everything, He found out that most furries were just hiding the fact they love beastiality. Disgusted and traumatized by that thought, he harbored great disgust against furries. One day, he got run over by a truck and got reincarnated into another world as a beast! Now what will our Haruki do in another world as he became the target of the very beings that he hates?