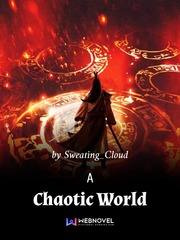 What is A Chaotic World

A Chaotic World is a popular web novel written by the author Sweating_Cloud, covering CULTIVATION, EASTERN FANTASY, Eastern Fantasy genres. It's viewed by 2.8M readers with an average rating of 4.3/5 and 89 reviews. The novel is being serialized to 376 chapters, new chapters will be published in Webnovel with all rights reserved.

In a world where demons and beasts reigned supreme, humanity had been pushed to the edge, living in constant fear. Lu Tianzi was a genius cultivator, determined to one day grow strong enough to fight for his race and bring humanity out of the darkness. But by a twist of fate, he was betrayed by the people whom he respected the most, even almost losing his life as a result. Lu Tianzi managed to survive by a stroke of luck, but now his heart had chilled. What feelings for his own race? What pride as a human? All that crap had died along with his past self when he was mercilessly cast away! Now no matter if it was humanity or the demons, none shall be spared as long as they stood between him and the pinnacle of the world!

Fury Towards The Burning Heaven