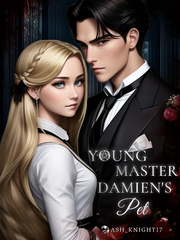 WARNING: This book contains mature R-18 content. *Slow burn book. No major misunderstandings or rape.* [Year 1788] "Who touched you?" he asked, his eyes brooding down at her and when she didn't answer, his voice thundered in the room, "WHO?" The butler who stood near the wall spoke shakily, "Sir, it was Mr. Reverale," Damien's face turned sour, his jaw ticking in anger he turned his face to the side where the butler stood behind. "Bring the man here." "N-now?" stuttered the butler. It was the time of night. Damien who hadn't broken his eye contact with the girl in front of him, pushed his hand against the wall which now rested beside his beautiful girl's head. Turning his body, he first looked at his butler who had his head bowed. With great courage, the butler came to meet his Master's eyes, "Do you have any other better time? Or should it be after I wring your neck?" Damien asked calmly tilting his head. Not a second later, the butler ran out of the room to return back with Mr. Reverale after twenty minutes. "Damien, are we having a late tea party?" Mr. Reverale came to greet but the master of the house had other plans. Spotting the knife that was stuck to the apple on the table, he reached for it to pull it out. Just as Mr. Reverale went to exchange a handshake with him, Damien took hold of his hand to place it on the table. In one swift movement as if he were chopping onions, he chopped the four fingers of the man off his hand making him yelp and cry in pain. "No one touches what is mine. I am sure this will remind you the next time you even think about touching her," sighed Damien as if he were tired of telling people to keep their dirty hands off his belongings. Meet Damien Quinn, a pureblooded vampire who is a complete narcissist, brash with his words and stingy even though he is rich who haggled when he bought a slave from the black market. On the other hand, meet Penelope who believes she is a 'guest' for a few days at the Quinn as she is intent on escaping from the odd vampire who needs therapy.