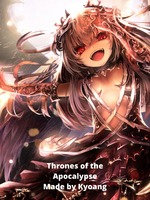 Thrones of the Apocalypse

What is Thrones of the Apocalypse

Thrones of the Apocalypse is a popular web novel written by the author Kyoang, covering GENDER BENDER, APOCALYPSE, MALE TO FEMALE, REINCARNATION, YURI, NON-HUMAN-PROTAGONIST, STRONG TO STRONGER, CRUEL MC, ROMANTIC SUBPLOT, Magical Realism genres. It's viewed by 228.3K readers with an average rating of 4.37/5 and 18 reviews. The novel is being serialized to 12 chapters, new chapters will be published in Webnovel with all rights reserved.

The apocalypse suddenly descended upon the world suddenly, panic spread everywhere. Monsters appeared and humanity's weapons were useless, a new era called 'Rebirth' has descended upon Earth. Supernatural powers appeared, magical equipment were crafted, greed became more apparant, power was a nessecity to survive and the weak were abandoned. Ash did everything to survive, scamming people who were naive, killing the innocent to be his bait, abandoning his treasures to escape and hiding for years. He died in the end, 200 years of survival ended, yet god wasn't nice to him as he suddenly gained a chance to redo everything, he didn't want to suffer anymore. This time he will be more powerful, cruel and cunning than everyone. For just to lead a peaceful life and to survive until the bitter end. (Cover from Pixiv)