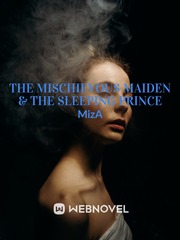 The Mischievous Maiden & The Sleeping Prince

What is The Mischievous Maiden & The Sleeping Prince

The Mischievous Maiden & The Sleeping Prince is a popular web novel written by the author MizA, covering TRANSMIGRATION, HORROR, SUPERNATURAL, MYSTERY, STRONG-FEMALE LEAD, HIDDEN IDENTITY, IMPOSSIBLELOVE, SLOW-BURN ROMANCE, Historical Romance genres. It's viewed by 1.4M readers with an average rating of 4.78/5 and 52 reviews. The novel is over and can be read all 271 chapters in Webnovel with all rights reserved.

[COMPLETED] "THE PRINCE IS NOT DEAD!" Her words, in front of the court, sealed her fate... Leaving Holstein is impossible, now! From the first moment Magnus von Wuttenfal met Alexa, he knew she was a liar and a problem. Who’s that girl and why his cold heart pumps so fast for her? Since Alexa laid eyes on the exasperating First Prince of Holstein, she knew she should keep a distance. Not only he’s sharp-tongued, entitled, and incredibly handsome, but he’s about to marry her new friend Cordelia! Does the First Prince Magnus, think of her as a mere toy... or an actual threat? Or something else? The fact she was born with a peculiar gift, and raised as someone else, shall not come to light. Her sad past full of betrayal and pain cannot be unveiled to anyone. Never! Torn between Prince Alexander and Prince Magnus, living and dead, her past and her future, will she love and be loved in return? Or will she once again be used and discarded? ------------------------ "Why... did you do that?" "Well, that was when I regretted acting like a bad son and a vile man, and before God. I had to take responsibility, didn't I?" 'But what nonsense is that ?! It's not like you really put your… thing… into my… thingy….' "Oh! OHHHH! You want to use me so you don't marry your bride! You set everything up! From sending me to the maze to… up to…" "Having you in my arms, tasting your mouth as I did this peach?! Is that what you're stuttering on, Lady Saskia? This will be repeated ad infinitum when we get married. That and more." COMPLETED NOVEL! ------------------------ WARNING: HEAVY SUPERNATURAL ELEMENTS, GORE, DISTURBING THEMES, SLOW BURN ROMANCE, RICH-IN-STORY NOVEL! I hope you like this story. If you wish, please support this tale by voting, rating, and commenting. Your feedback on typos or bad grammar is welcomed and appreciated. --- Also, check MizA’s original novel: Never Date a Man in Pink

The Emperor and the Knightess

Would You Dance with Me My Lord?