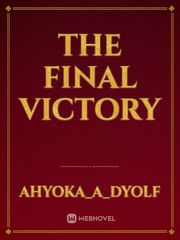 What is The Final Victory

The Final Victory is a popular web novel written by the author Ahyoka_A_Dyolf, covering EGGMAN, FAN-FIC, SONIC THE HEDGEHOG, TAILS, SONIC BOOM, NO SHIPS, Fantasy genres. It's viewed by 5.2K readers . The novel is being serialized to 25 chapters, new chapters will be published in Webnovel with all rights reserved.

Modern Eggman is dead, but is not out. Soon after his death, Modern Orbot initiates the doctor's revenge plan to distroy Sonic; but not physically this time- mentally.           Even those who have no idea aren't safe. In the Boom Universe, what looked to be a routine battle turned seemingly deadly.           All the Tails from the different universes are herded and contained in the Modern Universe, and the Moderns are kicked out. The Tails will be killed, and they can't do a thing.            However, the Moderns spread the word to the frantic Sonics and join forces to fight back. The Tails join into one Skulk, and fight to break free.            But will the heroes claim the final victory?