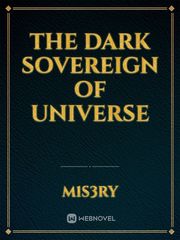 The Dark Sovereign of Universe

What is The Dark Sovereign of Universe

The Dark Sovereign of Universe is a popular web novel written by the author M1s3ry, covering MATURE, RUTHLESS MC, ORGANIZATION BUILDING, SUBORDINATES, Eastern Fantasy genres. It's viewed by 1.2K readers with an average rating of 0/5 and 0 reviews. The novel is being serialized to 1 chapters, new chapters will be published in Webnovel with all rights reserved.

In Immortal World, there are a lot of Immortals you can find everywhere. However, there are only ten peak Immortals who are closer to the myth realm called Supreme Immortals. The reason why Supreme Immortal was treated as a myth is that no one was able to find a way after a million of years in history. But, it all ended when a huge change appeared in the Forbidden Abyss. An ancient ruin has appeared and only Peak Immortals can enter. All peak Immortals seemingly have gone insane, they have waited for tens of thousands of years trying to find the key for Supreme Immortal. So the ten peak Immortals entered to find the key. Nightmare, one of the weakest and also the youngest Peak Immortal at the age of 5000 years old, knew he cannot find anyone of them. So, a big plan appeared in his mind and that is to snatch the key! Hundreds of years passed by. Eight peak Immortals died at the hands of Nexus, the most powerful peak Immortal holding the key in his hand. Nightmare, who had tried to fake his death to lower their guard, tried to assassinate and give Nexus a powerful blow that will instantly kill him but he failed, a great failure. He, Nightmare miscalculated. Nexus had realized long ago that his death was a fake and thus a great fight happened between them which cause Nightmare's death. But who would have thought that he is given a second life. It's just that he no longer lives in Immortal World but on a lower planet called Earth!