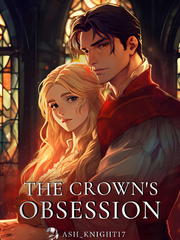 [R-18 content] *No rape* ~He wanted her. He would stop at nothing~ "Your bed is cold," spoke a voice in the room that had her eyes go wide in fear. Nervously, she turned around, gulping softly to see a shadow on her bed as if someone laid down there and the man who had been lying down sat up emerging out from the shadows where he had been waiting for her. "What are you doing here?" she asked when his feet touched the ground and he pushed himself up to start walking towards her. His handsome features looked more darker than usual because of the lack of light in the room. "I came to meet you," he tilted his head, "Where did you go?" "I went out for a walk," came the quick reply that had him smile, a smile that scared her the most. She took a step back when he came close to her but that didn't stop him from cornering her and her back hit the wall behind her. He raised his hand towards her face and she closed her eyes, scared. She shuddered when his fingers trail down from her temple and her jaw and neck. Her blonde hair was left open. "In the middle of the night?" she didn't answer him knowing he could decipher her lies through her words. He stepped closer that had her turn her face away from him and his words vibrated on the skin of her neck, "Did you go to meet him, my sweet girl?" * * * * * * * Discord: https://discord.gg/K63uVqN