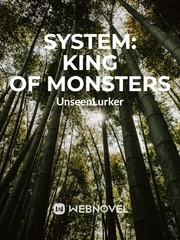 What is System: King of Monsters

System: King of Monsters is a popular web novel written by the author UnseenLurker, covering EVOLUTION, SYSTEM, NON-HUMAN MC, REINCARNATION, ADVENTURE, ACTION, Fantasy genres. It's viewed by 254.7K readers with an average rating of 4.52/5 and 21 reviews. The novel is being serialized to 19 chapters, new chapters will be published in Webnovel with all rights reserved.

Marcus's life was nothing special, and he had accepted that it would always remain that way until the end. But then, however, a miracle happened... _______________ [Stage Completion] 0.2% [Stage:] 1 [Name:] N/A [Potential Points:] 2 ---------- Remarks: A carnivorous tiny bipedal lizard. You can be considered as a predator, but only for small animals like squirrels and bugs! _______________ When Marcus met the end of his life, he was reincarnated in a body of a monster. And together with it is a foreign system of unknown origins! A system! that enables him to absorb traits and skills from whatever he had eaten! Sharper claws! harder skin! enhanced muscles! and many more! As long as he had enough points from killing strong enemies, he could have it all!

Rise Of The Worm Sovereign