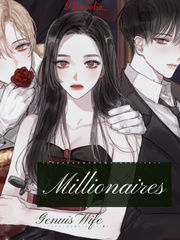 What is Millionaire’s genius wife

Millionaire’s genius wife is a popular web novel written by the author ameeliz_, covering REVENGE, MODERN, ROMANCE, ADVENTURE, MYSTERY, THRILLER, FEMALE-LEAD, THRILLER-ROMANCE MYSTERY, BETRAYAL AND REVENGE, MALE-ANTAGONIST, Contemporary Romance genres. It's viewed by 53.5K readers with an average rating of 0/5 and 2 reviews. The novel is being serialized to 60 chapters, new chapters will be published in Webnovel with all rights reserved.

Wish Young is a 24 year old, diligent university graduate who seems to live a normal life. But deep within, she only wanted revenge from her dreadful father, a successful businessman with a large manufacturing company, Oh! and the one who left her mother and sister to marry her current stepmother. "Monster." was what she called him. one day, her father, also the monster, invited her for a proposal to marry the heir of the top company. Her father wanted to join hands with the most successful company. Wish was ready to give up her normal life to get revenge from her dreadful father. She wanted her father to regret his whole life to ever introducing her to this fancy world. The day she met the heir who she was going to marry, also her fiance, William Brent, things started to go off course from her original plan. The heir was a troublesome guy who was going to be her first obstacle before she started her master plan to get the revenge. . . " Welcome, Wish Lennon." a deep and low voice echoed from her back. She abruptly turned around, startled to see a tall figure standing by the window. He had his hands inside the pocket with a glass of whiskey on the other. He studied her feature from her face to legs. It was William Brent. She was wearing a hot-red fitted dress stopping above her knees and a high slit showing her soft thighs. The dress wasnt over exposing on the chest just showing her sharp collarbone. But what instantly caught his eyes were her red plump lips. It was luscious. Wish fiddled with her fingers avoiding eye contact with him. Brent was enjoying the scene in front and smirked. " Lets have fun tonight." . . Cover art credit: @secondary ring

My Babyfaced Boss is the Devil