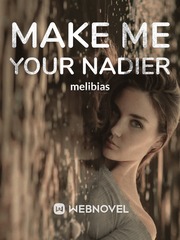 What is Make me your Nadier

Make me your Nadier is a popular web novel written by the author melibias, covering ROMANCE, COMEDY, LOVE CRAZY-YOUTH, FANTASY, COLLEGE, HEART BREAKING, PLEASURE, POSSESSIVE PARENTS, MODERN, TRAVELS FLIGHTS, Teen genres. It's viewed by 2.4K readers . The novel is being serialized to 7 chapters, new chapters will be published in Webnovel with all rights reserved.

Where love becomes madness And madness in love and contracts are broken........ according to the concept of abby it is not the same to be unfaithful to someone who are unfaithful to you, after a supposed love disappointment April decides to be more open and express what he wants without plugging, ignoring feelings, but, who can against the heart? when he says yes, no one can say no Perhaps very late he understood that all the time he had who would be the love of his life right next to him and that is why he had to win him back, or maybe he just wanted to put her to the test so as not to be a toy anymore. The new beginning that Abby will give in her life will force her to forget the past although not for this reason it will erase itself and eliminate the small stains of resentment and her first heartbreak, instead it will help her to see perhaps in a wounded way but it will force her to leave If she was the spoiled girl, this does not mean that she would become an adult, even at 22 she will still be the rebellious teenager but it is just what Nadier loves about her