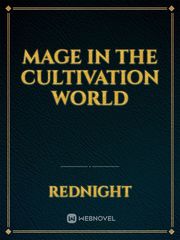 Mage In The Cultivation World

In a faraway cultivation world known by the name Nirvana, cultivators are preyed upon by the shadows. This is a world that lived under constant fear. Only the best of the generation would live long enough to make a name and only the best of the best could go against their destiny. That was becoming the hunter from the prey! Sadre, who had a genius for a dad, was born crippled. He became the only Mage of Nirvana!