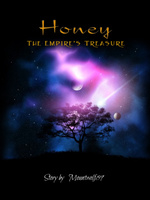 What is Honey : The Empire's Treasure

Honey : The Empire's Treasure is a popular web novel written by the author mountwolf89, covering REINCARNATION, ROMANCE, ADVENTURE, ACTION, COMEDY, LGBT CHARACTERS, Fantasy Romance genres. It's viewed by 1.8M readers with an average rating of 4.38/5 and 58 reviews. The novel is being serialized to 519 chapters, new chapters will be published in Webnovel with all rights reserved.

Meet Lila, she an outspoken orphan who lives on a planet that's about the end. Born to stay in the background by the people who abandoned her and friends who betrayed her. Lila wonders if her fate really is to just die. But second chances do come to those need so what do you say Lila? "Sure, what the hell!? I like to be born again." Hopefully her life will be much longer this time. *Please note, I am revising the previous chapters, I know they are hard to read LOL. Special thanks to all the readers who pushed through the chapters, and read the story anyway.

I was Born the Unloved Twin

Queen of the Castaway Isle