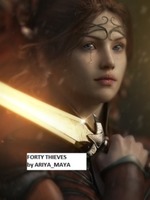 What is Forty Thieves

Forty Thieves is a popular web novel written by the author Ariya_Maya, covering REINCARNATION, ROMANCE, ADVENTURE, R-18, MODERN, SUPERNATURAL, FANTASY ADVENTURE, ANCIENT EGYPT, KINGDOM, PRINCE AND PRINCESS, Fantasy Romance genres. It's viewed by 6.7K readers with an average rating of 0/5 and 1 reviews. The novel is being serialized to 31 chapters, new chapters will be published in Webnovel with all rights reserved.

I was running away from them. My baby was crying in my arms as I tried to shush him. The biting cold was harsh my already thin frame. My baby’s lips started turning white. I glanced at how my baby boy stopped crying. I continued running until the town was far behind us and all I could see in front of us were just a field of thick snow. My baby’s lips turned blue. “Oh Lord, please don’t let anything happen to him,” I prayed to God and caught sight of an old church up the hill to the left of the snow-covered path. “Hang on there, baby, we are almost there,” I whispered to him. The falling snow was heavier as the minutes ticked by. Soon we were caught in a blizzard. With much difficulty we managed to reach the old church. My heart sank as I saw that it was a dilapidated and abandoned church. It only meant one thing, no warm fire to save my baby. I went inside anyway as that was the only shelter available for miles on end. There was no fire wood by the fire place. No blankets, no rugs or anything that I could use to warm us up. All my baby had was me. I cuddled him closer. I was losing my baby. “No, God! Lord if you can hear my prayer I am at your House right now please let my baby live! You can take my live, please let my baby live!!! Please Lord I beg you,” I kept repeating my prayer believing if I prayer hard enough God will really grant my wish and let me trade my life for my baby’s life. I did not know how long I prayed. When I finally checked on my son he was cold and dead. God did not help us. My prayers went unanswered. I wished the Earth would just open up and swallow me up as I lost the will to live on. I had lost my son, what else was there for me to live for? My last thoughts before I lost consciousness was, “God failed me.” ******************************** This incarnation: Theeya is the direct descendant of one of the original Forty Thieves. When everyone thought it was just a bedtime story that was popularized in the 1001 Arabian Nights. Their entire life changed course, taking on a totally different direction the moment Ali Baba killed all forty thieves. Theeya’s ancestors were guarding their family heirloom zealously. The only clue her late father guarded zealously was the parchment containing clues to where the secret cave was. Every man of each generation tried and failed to unravel the well hidden secret. Years later, it became her father’s obsession. Unfortunately he died without fulfilling his wish, that was to claim his birth right. As her late father had no son, only daughters, Theeya took it upon herself to continue her father’s legacy, to reclaim their family’s inheritance. She consulted the help of a dashing Professor, specialising in Egyptology, to unravel the mysteries of the parchments passed down from her forefathers. She found herself falling in love with Prof Jeff Everett, a man whom she thought to be gay. Only two years before that Theeya turned down the marriage proposal from her ex who cheated on her and had a baby with another woman when they were stil together. Theeya promised herself that she had no time for romance. She must not get married. She must not let her father down. It was up to her to get to the secret cave and find that Holy Grail of Immortality even if that means going to the end of the world looking for it, not that she mind to travel with the devilishly handsome Professor Everett. Her legs would go jelly and she would swoon each time she was in the Professor’s presence. Can she really survive her adventure with Professor Everett? As they traced the footsteps of men who lived for the secrets of the cave and the Holy Grail, they found the other descendants of the original Forty Thieves. One thing in common bound them, one thing that none could ever ignore, the bloody red eyes that would haunt their sleep. Would these nightmares end once they unravel the ancient secrets of the Forty Thieves cave?