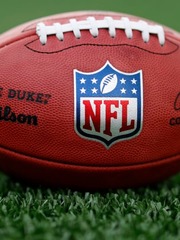 John was a football prodigy. He was in a trash football team when he was younger, and got them a 100% win record. He loved football, but one day his life shattered. He was going on a daily run when a car ran him over. From that day on, he was paralyzed and would never be able to walk again. He wallowed in depression, and had to stay in a white room for the rest of his life. It got better and he was able to get in a wheel chair, and he cried himself to sleep every night before he decided. No, he wouldn’t submit to this shit. Just because he can’t play football, doesn’t mean he can’t watch it, or coach it! He started to watch football games, watched every single nfl player. He then started to find their faults and send them messages on corrections, and exercises to fix their weak points. Many NFL players loved him, because he would help everybody out. They called him the Father of the nfl players, because he acted like a dad coaching his son to the players. The players would visit him and laugh with him. On his birthday, they brought him to a bar, and they drank away. Then one day, he was watching a highschool football game before he spotted somebody. It was the qb. The qb was on the losing team, but that was because of his team. He could tell the kid was made to be a qb. He had the talent, but didn’t have a team. He messaged this kid, and when the kid saw who texted him he screamed in surprise. He immediately had his parents drive him to the hospital and entered the room with his parents. “Kid, why do you play with that team?” “Uhh, my friends are on the team and I wanted to help them” “Friends? If they were real friends, they would want you to join a different team. You are a natural for the quarterback position. I’ll coach you kid, but leave that trashy team first” That was a life changing moment for that kid. He went on to dominate the NFL, and was known as the #1 QB. John was also known as the father of NFL, and one of the best coaches. It was often talked about what a monster would have came out if he wasn’t paralyzed. Some even joked if he didn’t get ran over, he would have destroyed the league. When John died, he died with no regrets, until he opened his eyes and realized, wait...I’m 10 years old?