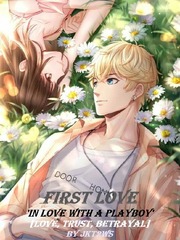 First Love “In love with a playboy”

One is a sweet innocent girl with such a beauty that anyone can be attracted to who likes to spread happiness among the people around her like a fragrance spreading flower but doesn't believe in love named Alora Jones, the heiress to one of the largest business empire in Britain who got to hide her identity of being an heiress and got to adobe an identity of a commoner to survive by ensuring her safety in a different country due to her life threat in her motherland. Another one is a handsome playboy with a cute and innocent face who can easily fool anyone by being a kind-hearted person helping others like an angel named Adrian Robertson. This sunshine like boy who is considered as an angel is a cold-blooded devil whose best hobby is to make girlfriends and toy with their feelings by making them fall into his love trap and break their hearts mercilessly into several pieces by making their lives living hell when he is bored and find new targets to enjoy destroying them completely. This is the story of two persons who are opposite to each other in every aspect of their personalities. Both of them meet each other during the best time of their youth having a strong connection at high school. Where Adrian becomes the mysterious boy who is a ray of hope and strength for Alora to survive in her most difficult time by being a beautiful dream and Alora becomes Adrian’s next target to toy with which he doesn’t want to. So, when the playboy Adrian meets the sweet Alora a type of girl he has never met before, will he make her fall into his love trap and break her heart??? Or Will he fall into his own trap and fall in love with her??? Or, Will innocent Alora fall into his love trap and become a pawn of his cruel game or Will she be the First Love of him that he has never fallen before???