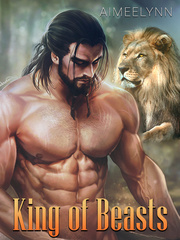 Falling in Love with the King of Beasts

What is Falling in Love with the King of Beasts

Falling in Love with the King of Beasts is a popular web novel written by the author AimeeLynn, covering ROMANCE, FANTASY, WEREWOLF, SEX AND LOVE, WEAK-TO-STRONG, ALPHA, TRANSMIGRATION, SHAPE-SHIFTERS, KIDNAPPED, SLOW-BURN, Fantasy Romance genres. It's viewed by 110K readers with an average rating of 4.82/5 and 23 reviews. The novel is being serialized to 56 chapters, new chapters will be published in Webnovel with all rights reserved.

Elia is a poor university student until the night she's taken to the world of the Anima—ruled by humans whose ancient hearts pulse with the blood of animals. There she's forced into a battle to the death. But when Elia survives, and refuses to kill her final opponent, the King must either kill Elia himself, or take her as his mate. Reth, the brutal and cold King of the Beasts with the blood of lions, shocks everyone when he chooses the weak, human Elia to become his Queen. He promises her every comfort of his wealth and position—but warns her she will not warm his bed. He chose her to defeat those that were trying to corner him into blending his Leonine bloodline with the Wolves. Elia must become stronger to survive among the Anima. But the vengeful Wolves see only a weak human that brought them shame. As Elia and Reth grow closer, the wolves are determined to destroy her. Will they admit their feelings for each in time to fight for the Kingdom—and their lives—against the treasonous wolf-tribe? Or will the wolves kill Elia and steal the throne? ***** He stalked towards her, chin low so the shadow cast by his hard jaw cut across the thick fur collar of his vest. His hair had fallen over his eyes in the scuffle, so he peered at her through it like a lion in the grass. With each step, his graceful, rolling gait reminded her of a predator stalking its prey. Despite the forest floor littered in twigs and leaves, he didn’t make a sound. “Wh-who are you?” Elia stammered, backing away, her hands up. He met her step for step until she came up hard against the tree behind her—and didn’t stop until he loomed over her, so broad his shoulders and chest made a wall in front of her. She could feel the heat rising off his skin in the cool, night air. “I am the Leonine King.” His voice was a dark, husky gravel. Behind him a chorus of wheezes, howls, and chirps of agreement rose from the people watching. “And you are?” “Elia,” she breathed. “Elia,” he growled, leaning in closer, bringing with him the scent of pine and rain and the musk of something distinctly male. “I am Reth.” He said the name with a strange, guttural roll in his throat. “I am King of Beasts. I am Clan Leader, and I am Alpha of WildWood.” Several snarls rose from the crowds behind him then, but he ignored them. Elia swallowed as he leaned in until the scruff on his jaw rasped her cheek. “I am the King,” he said, “And you will be my mate.” The forest behind him erupted. (Cover Art used by permission. Illustrated by Aenaluck--see more gorgeous art and support them on www.patreon.com/aenaluck)