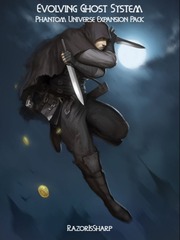 Evolving Ghost System: Phantom Universe Expansion Pack is a popular web novel written by the author RazorIsSharp, covering SYSTEM, GAMEELEMENTS, HAREM, LITRPG, COMEDY, Video Games genres. It's viewed by 1.2M readers with an average rating of 4.55/5 and 16 reviews. The novel is being serialized to 110 chapters, new chapters will be published in Webnovel with all rights reserved.

Harvard had been a well respected lawyer, but then he got killed by his girlfriend because he forgot to take out the garbage and she also had robbed a bank. Afterwards, he had a lot of time to think in the underworld before he got to meet King Yama - a beautiful women with the greatest mounds and body he'd ever seen on the ruler of the underworld. She invited him to take part in the phantom universe expansion pack, and because of his lot in life, she decided to give him a little bit of much needed help. He gets lucky enough to inherit the Evolving Ghost System, and journey into the new expanded universe! Inside, he will meet lots of beautiful women, complete quests from badass NPCS, and have fun joining a guild and terrorizing the new universe. There is nothing he cannot do with his new system! [Evolving Ghost System would like to give you a gift basket!] [All Host has to do is complete a simple Quest to receive it!]] 'Oh god, I hope it's more simple than killing 100,000 Ghost Slimes. My reputation is still ruined because of that!" Harvard nervously opened the prompt. "Oh no! Oh god! Here we go again!" *** Any votes are appreciated and will birth new chapters! Please add to the library as well if you wouldn't mind, and come back and expect daily updates if this story gets enough votes! Thank you for your largesse!