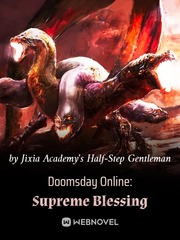 What is Doomsday Online: Supreme Blessing

Doomsday Online: Supreme Blessing is a popular web novel written by the author Jixia Academy's Half-Step Gentleman, covering Magical Realism genres. It's viewed by 1.5M readers with an average rating of 3.79/5 and 297 reviews. The novel is being serialized to 142 chapters, new chapters will be published in Webnovel with all rights reserved.

Master of the End Times

This Earth Is A Bit Fearsome