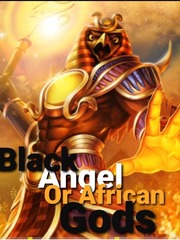 What is BLACK ANGEL OR AFRICAN GODS

BLACK ANGEL OR AFRICAN GODS is a popular web novel written by the author pen_inker, covering REINCARNATION, ROMANCE, ACTION, CULTIVATION, Fantasy genres. It's viewed by 21.2K readers with an average rating of 4.87/5 and 14 reviews. The novel is being serialized to 48 chapters, new chapters will be published in Webnovel with all rights reserved.

Nine million years ago. Before the appearance of the first men on earth. There was a great war that destroyed the order of the heavens. Superior beings fought for hegemony and power. Several powerful gods and Immortal beings were slain and annihilated. Amidst these crises, a young black prince rose to power, burdened with his innate desires to gain ultimate knowledge, he strives to uncover the secrets of the forces of heaven. Caught up in intense family fights and drama, he hopes to be triumphant. However, in his quest to be better he has to contend with several forces of good and evil. Will he be able to uncover the secrets of heaven? Will he succeed to settle his family dispute? Will he come out victorious against the forces of good and evil?

The Ones Who Live in Espington