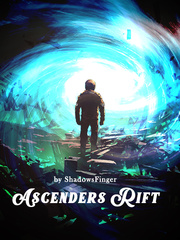 What is Ascenders Rift

Ascenders Rift is a popular web novel written by the author ShadowsFinger, covering SYSTEM, OP-MC, GAME-ELEMENTS, ROMANCE, ACTION, WORLD-TRAVEL, STRONG-PROTAGONIST, SECONDCHANCE, APOCALYPSEREINCARNATION, GODSANDDEMONS, Magical Realism genres. It's viewed by 2.6M readers with an average rating of 4.6/5 and 128 reviews. The novel is being serialized to 269 chapters, new chapters will be published in Webnovel with all rights reserved.

It is the year 2050 of the Earth Calendar, and while many would think it to be an ordinary year, it is far from what one would expect. With the arrival of Rifts popping up all over the world, portals that came to be known as Ascenders Rifts, a new era is born. Though filled with endless possibilities, the world itself is on a path of destruction. Evan Cross, a warrior from the ruined future, struggles to fight against the inevitable fate of humanity. After failing to save the world two times, he is faced with the same choices yet again, but this time it might just be different. ____ Follow me on Twitter & Facebook & Discord: Discord - https://discord.gg/ffVV7cV Twitter -https://twitter.com/ShadowsFinger Patreon-https://www.patreon.com/ShadowsFinger5 Amazon-https://www.amazon.com/dp/B07C7912KX Facebook - https://www.facebook.com/ShadowsFingers/ ===Release Details=== Daily release - 2 chapters (9:am - 12:pm) The weekly mass release is determined by Power Ranking, so keep voting Power Stones :) ===Subscribe to my Mailing Lists==== https://www.subscribepage.com/shadowsfinger_copy Want to show some support? Drop by a Review and a Power Stone. You can also send me a Gift or Paypal Me :) https://www.paypal.me/shadowsfinger