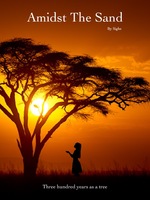 What is Amidst the sand

Amidst the sand is a popular web novel written by the author Sigheti, covering HISTORICAL-FANTASY, CONTEMPLATIVE, UNISEX LEAD, Fantasy genres. It's viewed by 91.3K readers with an average rating of 4.64/5 and 50 reviews. The novel is over and can be read all 6 chapters in Webnovel with all rights reserved.

‘I’m but a tree, hence I cannot help you. My own roots are stuck in the belly of Mother Earth, hence I cannot reach you. No eyes adorn my bark, hence I cannot cry for you.’ In the year 1500, a tree tormented by his own memory and prejudices, encounters various figures. Writing contest #62: reincarnated as a tree.

Diary of the Dead

Once Upon A Time (Story of The Betrothed and Farah)

From Slave to Ruler

Story of a Big Player from Gangnam