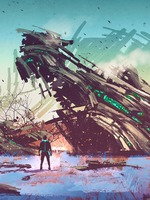 2332: Fleeing the Arrakis is a popular web novel written by the author GreenTLeevis, covering SCI-FI, SPACECRAFT, ACTION, AI, SPACE-TRAVEL, SPACE OPERA, SPACE EXPLORATION, ADVENTURE, SPACE BATTLES, LITRPG, Sci-fi genres. It's viewed by 8.7K readers with an average rating of 0/5 and 1 reviews. The novel is being serialized to 7 chapters, new chapters will be published in Webnovel with all rights reserved.

What if you can build a town that can move faster than the speed of light? It’s the year 2332. Silas Creedy, a retired Olympic Fencer in his late twenties, has befallen hard times in a crashing economy caused by dwindling rare minerals on Earth and Helium-3 on the lunar surface. He works as a manual laborer for the Space Force, accepting a measly pay while maintaining a strong physique. On Monday morning, Silas receives a notice of termination, but General Grant Freeman makes a dangerous offer: explore a region of space far beyond the Ort Cloud in a top-secret electrogravitic spaceship while wearing a prototype exosuit that augments reality into a role-playing game. The objectives? Locate a source of Helium-3. Plain and uncomplicated. Silas accepts, but on an Earth-like planet he comes across a seemingly unmanned crashed spaceship that has a remarkably similar aesthetic to his exosuit. As local Fauna attack him, the crashed ship’s AI hijacks his suit’s augmented reality programming, fends off the the locals, and repairs itself by fusing with Silas’ ship. Silas soon finds himself in the midst of a war between two Kardashev type-3 civilizations vying for dominance over the Milky Way. With his new AI companion, Tracey, Silas decides to go on the run to keep Earth’s location secret.