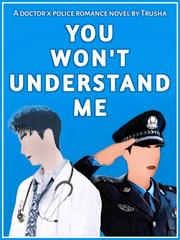 You Won't Understand Me

What is You Won't Understand Me

You Won't Understand Me is a popular web novel written by the author Trusha, covering LGBT+ genres. It's viewed by 79.6K readers with an average rating of 4.91/5 and 13 reviews. The novel is being serialized to 60 chapters, new chapters will be published in Webnovel with all rights reserved.

ーー "Try to understand, Yul. This won't work. We are too different to be together," Zeng said, trying to push back his emerging feelings. Yul, on the other hand, knew the meaning behind that trembling voice, "Trust me, Zeng ge. It will be alright. I'll try to understand you more and we will make this work. We will make 'us' work, Zeng ge. I promise!" ーー Dr. Xiao Zeng and Police Officer Wang Yul are two different individuals with nothing in common. The former is worried about the police officer's safety while the latter is trying to build a safe society for the doctor to live in. On top of that, if both belong to the same gender, it doesn't help much. One is gay, the other not so. One is no longer interested in love while the other is struggling to keep his love at first sight forever with him. Occupations, beliefs, aims, visions; all contrast with one another. Amidst all the complications, they are trying to form a genuine bond and maintain it. Both have their own insecurities and their own ambitions ahead, meanwhile the relationship will face the tests of harsh realities. Will this pair make it or ... Either way it's only a matter of understanding each other, but the question is ... will they? ~×~×~×~×~×~×~×~ Disclaimer : This story is intended for mature people and contains LGBTQ+ content. By clicking on the story, the reader agrees that they are of legal age to read it. This is a work of fiction and any resemblance to any person, place or time is a coincidence. No part of this book is allowed to copy, translate or reproduce in any form without the written permission of the author. Plagiarism is punishable by law. ~×~×~×~×~×~×~×~ Hey there, enjoying the story so far? Feel free to share your thoughts and connect with me on : Discord : Trusha#6334 Thank you ^_^ #LGBT #boyslove #gay #bisexual #police #doctor #manxman #bl #boyxboy

Love Lives in His Eyes [BL]