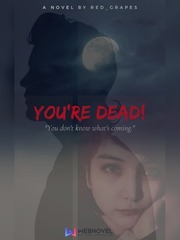 What is You're DEAD!

You're DEAD! is a popular web novel written by the author red_grapes, covering VAMPIRE, OVERPOWERED-MALE-LEAD, ACTION, MODERN, OVERPOWERED FEMALE LEAD, Fantasy genres. It's viewed by 41.1K readers with an average rating of 4.85/5 and 12 reviews. The novel is being serialized to 37 chapters, new chapters will be published in Webnovel with all rights reserved.

This is a Fantasy-Action-Mystery Novel. Clueless OP Female Lead in Modernity? 300 years old ancient vampire? Badass FL and ML? Slow or unhurried romance? Mysteries and hidden secrets? Battles between Humans and Vampires? The story concentrates on mystery, action, secrets, powers, interactions, and a little bit of comedy. If you like a touch of romance, this will be a slow one. The main story will pick up and start from Chapter 21- Chapter 22, it will get more interesting thereafter. --- "You shouldn't have done that." "You don't know what's coming." "YOU'RE ALL DEAD." An accident turned tragedy because they woke her up. She never wanted to wake up. She stopped killing people when they agreed to let her sleep in a coffin that was buried, FOREVER. But, is there a reason why she never wanted to wake up? No one dared to wake her up, but 300 years have passed. Everyone forgot about her or her location. 'Why are all the other vampires so slow or so weak?' 'It's not the year 1730, anymore... I slept for 300 f*ckin' years. But, where are the other vampires I knew? This old woman, why is she old? Why did she age?' 'Why don't we battle it out, to know who's the strongest?' "You're an ancient vampire?!!!" 'I will know all the answers to these questions about you, Milla. Your reasons.' --- I would like to warn you that this novel contains bloodshed/gore scenes, please be warned. No romance or might be a very slow romance. Join Milla and Lionel as these two overpowered vampires try to kill each other! -red_grapes- Novel date (starts): July 27, 2020

The Making of the Vampire Queen

Is She A Bad Girl?