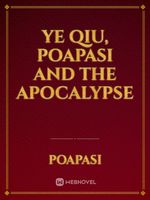 Ye Qiu, Poapasi and the Apocalypse

What is Ye Qiu, Poapasi and the Apocalypse

Ye Qiu, Poapasi and the Apocalypse is a popular web novel written by the author poapasi, covering APOCALYPSE, TKA CONTEST, TKA FANFIC WRITING CONTEST, TKA, YE QIU, POAPASI, Fantasy genres. It's viewed by 8.4K readers with an average rating of 0/5 and 2 reviews. The novel is being serialized to 6 chapters, new chapters will be published in Webnovel with all rights reserved.

Disclaimer: The King's Avatar, the characters, and all its wonder belong to the creator, Butterfly Blue. I am writing this story for the TKA fanfic contest even though i have not read the novel until the end. Please bear with me as i am not that good in writing. Ye Que and the Apocalypse Poapasi is just your average user of the webnovel app. He reads when he has time and updates his novels when he can relax and has found inspiration. Although not a fan of TKA because he has limited spirit stones, he plans to read it after his top three favorite novels are completed. Who would have guessed that webnovel would create "Ye Qiu Mobile Assistant". This created a hype for the webnovel app users. Poapasi promised to read "the King's Avatar" after downloading the update. Meanwhile a virus that can turn people into zombies was spread throughout the world using a unique method. Fortunately the virus mutated and evolved a small portion of the population, allowing them to gain special powers. Poapasi was updating his webnovel app to be able to use the "Ye Qiu Mobile Assistant" when he was infected by the virus. What powers did he receive?

The Biker Brothers and the Golden Baby

The Adventures of Treasure Hunters - 1 season

A Sojourn of a Transmigrated Housewife

Living in the Future ABO