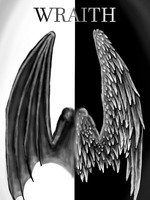 Wraith is a popular web novel written by the author SkifferSketches, covering SUPERNATURAL, FANTASY, FRIENDSHIP, DRAGON, PRINCE, FIGHT, CURSE, SPIRIT, SHAPESHIFTING, Fantasy genres. It's viewed by 2.6K readers with an average rating of 0/5 and 0 reviews. The novel is being serialized to 9 chapters, new chapters will be published in Webnovel with all rights reserved.

In a place where spirits roam the world alongside their mortal counterparts, Kadezna wakes from a coma to find himself in a modern world, a far cry from the medieval times his fractured mind remembers. Suffering from severe amnesia, Kadezna struggles to find his place in the new chaos of technology around him. Kadezna is quickly taken under the wing of Ashnix Trailia and inducted into the Order of Holy Water. The Order, created to protect humans from evil Southern Spirits, is actively combating the Wildfire Cult: a cult known for their brutality and with only one goal, to rule humanity through the use of evil forces. With an extensive knowledge of spirits, he did not realize he had, Kadezna is eager to join the fight against evil. However, he quickly discovers that he is not as welcome in the Order as he thought and that his past is intricately woven with that of the Wildfire Cult. With the help of unlikely friends, Kadezna must discover his past and heritage, defeat an undefeatable foe, and forge a bond with an angry and stubborn spirit.