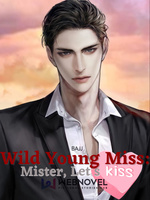 Wild Young Miss: Mister, Let's Kiss! is a popular web novel written by the author BAJJ, covering ROMANCE, REINCARNATION, COMEDY, SLOW-BURN ROMANCE, MODERN, ACTION, MAFIA, Contemporary Romance genres. It's viewed by 2.4M readers with an average rating of 4.78/5 and 123 reviews. The novel is being serialized to 426 chapters, new chapters will be published in Webnovel with all rights reserved.

Money, power, and influence, Zoey Zhou had it all… or does she? Zoey Zhou, a 28-year-old self-established businesswoman whose only talent was to earn money and to earn even more. As a woman whose years were spent chasing those money signs, Zoey had nearly forgotten that her exciting prime years was nearing its end. The reason she had gone in search of her companion for life. However, how could a 28-year-old desperate woman find her soulmate if the greatest hurdle was Zoey, herself? Was it because of her standards? Heck, no! She has no standard at all! Then why, you ask? Well, it was because of one simple reason: Zoey was particularly attracted to men who were not interested in her! And to make things worse? She loses interest once they had reciprocated the feelings! What would happen if the desperate and narcissist drama queen Zoey becomes the heroine of the mysterious and the weirdest man on earth? Will spring come forth? Or, just another disaster will ensue? *** EXCERPT: "Are you sure you're not crazy?" Zoey Zhou narrowed her eyes as she leaned closer to his imperious mien. "Hmm?" “I mean, how can you not like the pretty me? Say, should we kiss and see if it will ignite some spark?” The corner of her lips curled into a grin while her brows moved up and down suggestively. Slowly, the man raised his eyes to meet her playful countenance across the table. Blinking once, his eyes traveled from her eyes down to her lips. He stared for a moment at her red, provocative lips before he opened his mouth. “Kissing you,” he said, raising his finger to point at her lips, “means your lipstick will smear on mine. I'm afraid I must refuse.” “Lame.” Zoey Zhou scoffed as she drew away from the table. “I knew it. He’s gay, tsk.” Zoey Zhou murmured. Alas, right after she blurted out her last remarks, her wrist was grabbed by his huge hands and without missing a beat, the man pulled her back to his embrace. “I heard that. Do you want to confirm the validity of your claim?” His voice was deep and yet so alluring. He leaned his head closer to hers, his musky smell emanating sexiness, as a glint flashed across his pair of playful eyes. ----- For spoilers, questions, novel discussion, join my discord server: https://discord.gg/tdSWbQK Catch me on discord: BAJJ#2931 *cover not mine. credits to the rightful owner