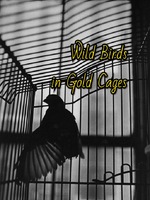 What is Wild Birds in Gold Cages

Wild Birds in Gold Cages is a popular web novel written by the author lavenrose071, covering ROMANCE, ACTION, DRAMA, SECRETS, FREEDOM, DANGEROUS, CHOICE, DIFFERENT PERSONALITIES, HIGH SOCIETY, HIGH CLASS FAMILY, Contemporary Romance genres. It's viewed by 518 readers with an average rating of 0/5 and 0 reviews. The novel is being serialized to 0 chapters, new chapters will be published in Webnovel with all rights reserved.

Both were from prominent families except that they represented two completely different ends of the spectrum. She was rebellious, adamant, and a daredevil for a daughter. He was a paragon, an ideal leader, a picture-perfect son. She fooled others into thinking they had her under ropes but in reality, she defied every decision made that wasn’t hers. He followed the golden path paved for him and never questioned what more he could possibly need or want, unaware that what he lacked was the ability to choose for himself. Similar predicaments yet different lives. She thrived in danger and spontaneity. Order, predictability, and control kept him grounded. Both were fairly satisfied with their lives — that is until their fates intertwined and knotted itself together. Confronted and frustrated by a way of life they found repulsive, they challenged each other about the truth of personal freedom and choice. Will they learn to reveal their true selves to each other? Or is it all a mistake never meant to be made? After all, nothing could be exhilarating than having everything yet being ready to lose everything. This is my first novel I'm publishing online! Any feedback is welcomed because I seek to grow as a writer! Let me know what you think and thank you for reading! Note: I'll try to update when I can. I'm currently still in school so things are often hectic and I'm fairly picky with my own creative flow! I appreciate the patience though!