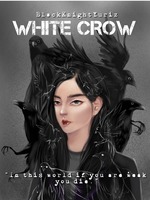 What is White Crow

White Crow is a popular web novel written by the author BlackKnightYuriz, covering ACTION, ROMANCE, SURVIVAL GAME, FRIENDS AND FAMILY, KNOWLEDGEABLE MC, FIGHTER, KILLING GAME, HARDLIFE, REVENGE > ACTION, ARENA, Teen genres. It's viewed by 10K readers with an average rating of 0/5 and 0 reviews. The novel is being serialized to 4 chapters, new chapters will be published in Webnovel with all rights reserved.

"What do you want?... Wealth, Fame, Power, Freedom or anything that you desire?" "None of these, I only want to kill that man!" ............. Mizu Sodomaki lived in the slums of Hesteria when was still younger. She got a poor and miserable life. Having to be raised by a terrible mother, who often beat her up. Until one day she met a boy named Shiro. The only person who comforts her soul, her first love. Yet, later on, he left her . 5 years later, they meet again. In a horrible place called the arena, where they play a survival game. A place where no one can escape, in which killing their opponent is the only key to survival. Crush or be crushed! In this world, if you are weak, you will die! [This is a side story of one of the characters in the book title, The Vengeance of the Crimson Blade. ]