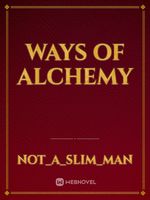 What is Ways Of Alchemy

Ways Of Alchemy is a popular web novel written by the author Not_a_Slim_man, covering ROMANCE, FANTASY, REINCANATION, OVERPOWERD-MC, ALCHEMIST, HIDES STRENGTH, Fantasy genres. It's viewed by 1.1K readers with an average rating of 0/5 and 0 reviews. The novel is being serialized to 1 chapters, new chapters will be published in Webnovel with all rights reserved.

Leon Bastia a twenty years old, everything about him is perfect from outside hansome tall,but to bad his talent is between bad to worst his parents is die long time ago when he still five his father is small soldiers and his mother is rank 1 Alchemy,they both pass away then defend the city from beast horde thank to his mom a rank 1 Alchemy after his mom pass away the Alchemy association take care of take care of him when he was 10 he take his first test as alchemy apprentice,but he fail he pass his test at five try he was oldest Alchemy apprentice,a 15 years old and for next five years he didn't make any progress and stuck at Alchemy apprentice and his condition slowly become a burden