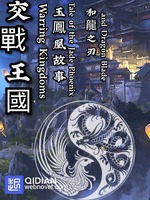 What is Warring Kingdoms: Tale of Jade Phoenix and Dragon Blade

Warring Kingdoms: Tale of Jade Phoenix and Dragon Blade is a popular web novel written by the author LuoNa, covering ROMANCE, ACTION, ADVENTURE, R-18, COMEDY, CULTIVATION, FANTASY, WUXIA, ANCIENT, SPG, Fantasy Romance genres. It's viewed by 84K readers with an average rating of 0/5 and 2 reviews. The novel is being serialized to 96 chapters, new chapters will be published in Webnovel with all rights reserved.

Long long ago in old Jianghu, there was once a kingdom of stronghold and power. The kingdom of the Jade Phoenix ruled by it's benevolent and resilient leader, Wei Xuan lived in peace and secrecy, not knowing that one day, the shadows will consume the whole kingdom and chaos overturn the tides of their silence. Then came a time the next heir to the throne stepped to his position. Wei Yue, the next heir took the throne but calamity stroke the whole kingdom during his reign. Overthrown from his own reign, Wei Yue sought help from his loyal friends and his followers to rebuild his kingdom once again. But little did they know that everything that had happened in Old Jianghu has been affected by divine intervention of Immortals from ninth heaven. Everything went clear until The Jade Phoenix's General, Hua FeiXian met the Dragon Blade's Top Assassin, Na YingLuo and her brother, Na MoXiao. ------------------- Everything that happens has a reason... The lies... The guilt...Life and Death... Blessings and Curse... "Old Jianghu will never fall today."