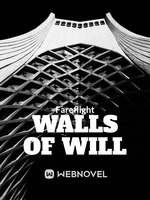 What is Walls of Will

Walls of Will is a popular web novel written by the author Fareflight, covering FANTASY, SCI-FI, WAR AND MILITARY, SPACE, SPACE-TRAVEL, SPACE AGE, SPACE BATTLES, SPACE EXPLORATION, Sci-fi genres. It's viewed by 5.1K readers with an average rating of 0/5 and 0 reviews. The novel is being serialized to 6 chapters, new chapters will be published in Webnovel with all rights reserved.

Rudolf Reis has lived nearly his entire life as a soldier in the Navy, serving his country as best he can with everything he has. Now with little left and still a long life ahead of him he searches for meaning where he believes there is none. He has lost it all, he is depressed, hurt, and lost. His country hasn't betrayed him nor has it lied to him. In fact, they warned him of the consequences of his actions. His youthful ignorance pushed him forward to his dreams. He fell in love and lost it. He reached the rank of his fantasies but it feels empty. He cant continue like this, he knows it. As if the gods of his faith were listening to his woes, they have granted him meaning. A purpose for which he can reignite his passion. Meet Rudolf Reis, he isn't a hero. He isn't special or a genius. He's a hard worker but he isn't unique in that regard either. Follow his second chance at more while he struggles to achieve something great. Not alone he fights with those he trusts and hopes for just a bit more.