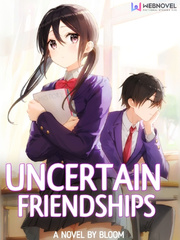 What is UNCERTAIN FRIENDSHIPS

UNCERTAIN FRIENDSHIPS is a popular web novel written by the author Bloom759, covering ROMANCE, MODERN, TEEN, ADVENTURE, COMEDY, CRUSH, YOUNG ADULT, WEBNOVEL, WATTAPADSTORIES, ORIGINACHARACTERS, Teen genres. It's viewed by 75.8K readers with an average rating of 4.68/5 and 33 reviews. The novel is being serialized to 6 chapters, new chapters will be published in Webnovel with all rights reserved.

Constant relocation has been a regular thing for Katie Brooks. But suddenly she met herself in her new home where residing seems stable, with her new found friends, adversaries and possible Crushes? Katie will have to determine which is the right for her before it's too late Not your every crush next door cliche story What happens when you try fighting the cliche things mapped out in a crush next door story? Will Katie fall victim or will she create a new path of story line in her crush next door or is it just infatuation? Is infatuation always the right start to go with? You'll just have to find out ¶Sneak peek↓↓ Resigning to my previous posture, I turned due west to my locker after the huge clock which hung on the ceiling in the hallway, Immediately bumping into someone with my books and stationery falling off my hands, "Hey! Watch it you moron!" Rubbing my head and squinting to the pain. I had definitely not wanted my first day of school to be like this, I opened my eyes slowly only to come face to face with my offender, he held a smile and offered his hand out to me, all I did was stare at his hand in confusion, no one had ever showed this kind of help to me in a very long time, not even noticing my presence well except my mom. What does he want? Get up! Before he thinks you're weak Then the spell was broken, I shrugged off his hand and stood up myself, picking my books and stationery in the process not wanting to show I'm a damsel in distress and went off to my first class, that's if I know where that is though. Damn! Why did I not take the manual like mom advised? "Hey!" The mysterious boy called out. Just ignore him, he'll get tired eventually and probably leave me alone. Increasing my pace as I went in the opposite direction but stopped abruptly when he called out once more. "I haven't seen you around here before, do you by chance know where our history class is K-a-t-i-e B-r-o-o-k-s?" Waving my history textbook in the air which I had mistakenly left out while in a hurry to leave. Approaching slowly, clearly embarrassed. "Thank you." I put on a fake smile as I retrieved my textbook. ¶Extra info Updates: At least twice a week Features: TGIF Releases(5 chapters on Fridays) Instagram account: @Uncertain_Friendships where: •Sneak peeks would be released ahead of time •Mass release updates •Milestones •Appreciation for reviews, votes •Shoutouts to those who need it on Instagram •An avenue to ask/give suggestions •Discussions based on this book •Possible edits would be announced

Not The Outcast Anymore

I hope I never lose you