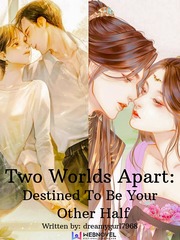 Two Worlds Apart: Destined To Be Your Other Half

What is Two Worlds Apart: Destined To Be Your Other Half

Two Worlds Apart: Destined To Be Your Other Half is a popular web novel written by the author dreamygurl7968, covering TRANSMIGATION FEMALE LEAD, STRONG-FEMALE-LEADS, ROMANCE, MAGIC-REALISM, ELEMENTAL POWERS, Fantasy Romance genres. It's viewed by 63.6K readers with an average rating of 4.94/5 and 13 reviews. The novel is being serialized to 33 chapters, new chapters will be published in Webnovel with all rights reserved.

Two different woman, two different worlds and one incident that changed their whole life. One was a rich heiress, destined to marry the prince; while other was a brilliant doctor. Wan Xieren and Chen Juan were two different people from the parallel worlds, but due to an accident, they transmigrated to each other's body. Trying to Find their ways to return to their original place, they have to help each other to face their problems. While Wan Xieren was a lady of a rich household, who became the villain of the love story of her ex-fiance and his girl, and was murdered by someone unknown. While Chen Juan learned about her father's affair and ended up with an accident. Both had their own unfortunate and misery, but things changed when they both exchanged their bodies, and started to develop feelings for their other halves. One was an 18th century rich lady, the other was a 21st century brilliant doctor, two worlds apart, will they be available to go to their life and to their other halves? **** The book is written in a parallel universe. Everything is fictional. Cover is not mine, I have just edited it. All credits go to the original artist. Update schedule: 1chp/day. Excluding the mass release when we hit the goal set for that week. Author's social media: Instagram: @dreamygurl7968 Discord: https://discord.gg/Jp6xKrH Other books of author: The wife of the underworld lord is a ceo I Fall For The Devil When I Fall in Love with My Ex