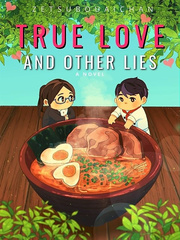 True Love and Other Lies

All she wanted was to convince Qin Zhan, a well-known patisserie, to join her in her new restaurant. But, everyone who she had sent returned with bad news: Rejected! Rumor has it that Qin Zhan quit life as a reputable chef to stay in the small town and run a small noodle stand. No matter how much anyone offered to hire him, Qin Zhan had rejected every one. No! That man would not even hear a word before he showed everyone to the door. Since everyone she sent returned with no good result, Gu Xin Ye had no other choice but to do everything herself! Just as Gu Xin Ye thought that she will be able to convince Qin Zhan with her persuasion skill and charm, a misunderstanding led her to work for Qin Zhan instead, as his helper! ----- Illustration: kirinlukis ----- Support me at https://ko-fi.com/zetsubouaichan