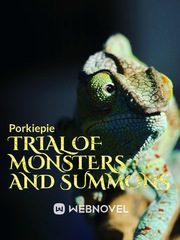 Trial of Monsters and Summons

Humanity faces complete annihilation after nukes are launched all over the world at the end of WW3. A diety intervenes moments before the bombs explode, preventing the destruction of all life remaining on Earth. This action isn't without a price though, as the diety gives humanity a chance to survive by placing them in a trial of its' own making to prove their worthiness. Thus beginning the Era of Summoning, and everything humanity knew is turned on its' head. Suddenly the world revolves around summons being used to fight monsters hellbent on wiping out humanity. "Will humanity band together to become stronger and fight off the monster hordes, or will they remain as they were and continue on the path they were previously set on and bring about the complete annihilation of their race?" Link to my Patreon if you feel like supporting me- https://www.patreon.com/Porkiepie PayPal- PayPal.Me/lucasbaird99 I've also created a Discord for the novel with the title as the server name, I'm still pretty new to it though. Link- https://discord.gg/Y8X2ZCA