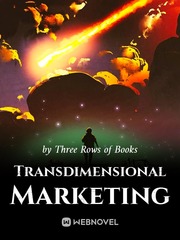 What is Transdimensional Marketing

Transdimensional Marketing is a popular web novel written by the author Three Rows of Books, covering Magical Realism genres. It's viewed by 1.6M readers with an average rating of 4.15/5 and 260 reviews. The novel is being serialized to 362 chapters, new chapters will be published in Webnovel with all rights reserved.

I am merely a reviewer, albeit the products I review are slightly different. For example, I review quantum computers, artificial intelligence, anti-gravity mech armor, planetary engines, sublight colonial ships, stellar detonators, etc... Chen Yu: "The technological product I bring to everyone for today's episode is—a dual-vector foil! W-Wait! Everyone, please calm down! Let me explain..."

Bringing Culture to a Different World

Losing Money to Be a Tycoon