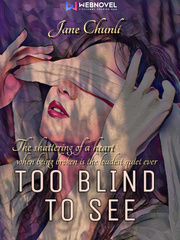 TOO BLIND TO SEE

What is TOO BLIND TO SEE

TOO BLIND TO SEE is a popular web novel written by the author Jane_Chunli, covering ROMANCE, COMEDY, MODERN, SYSTEM, Contemporary Romance genres. It's viewed by 42.9K readers with an average rating of 4.77/5 and 22 reviews. The novel is being serialized to 45 chapters, new chapters will be published in Webnovel with all rights reserved.

What is love when you can't have the one your heart desire? When fate has cursed you? As a painter, Jane ended up falling for her friend who's a celebrity. But since fate has other plans for her, her feelings ended up not being reciprocated which left her all battered and depressed. Eventually her friend's parents brought a marriage proposal to her, informing her she's his bride to be. She went berserk at first but her celebrity friend didn't want that which left her heartbroken. Tired of how her life was going and how she could never have her dream man, she faked her own death and left for another country. There she changed her identity and name, she started her life afresh and started working at a coffee shop where she met another celebrity who recongized her talent in singing and decided recruit her in the music company he's also working as a singer. Finally, fate decided to have some mercy on her and living up to her dream, She joined a female music band called TGS who changed her whole life. But her past life came knocking on her door step when the man she once loved will be the one featuring her band in a song. Him returning into her life threw her into a deep trauma which she couldn't overcome. She will have to face her past life, everything and everyone she left behind including her family.

The Crown Flower: My First Love

I wanna stuck with you