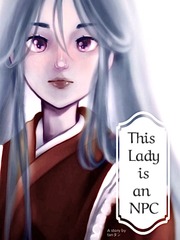 This Lady is an NPC

What is This Lady is an NPC

This Lady is an NPC is a popular web novel written by the author tantan_kaku, covering OTOME, ADVENTURE, FANTASY, MAGIC, FICTION, GAME, NOVEL, SYSTEM, NPC, SIDE CHARACTER, Fantasy Romance genres. It's viewed by 1.3K readers with an average rating of 0/5 and 0 reviews. The novel is being serialized to 0 chapters, new chapters will be published in Webnovel with all rights reserved.

Sei An, a 20-years-old girl, did not live a normal life. Yet, even though she got used to those irregular days, something even more extraordinary happened. "Where am I?" Said Sei as she opened her eyes. Soon later, not only did she found out that she was in a different world, but this world was extremely similar to a novel she once read before. Furthermore, she was categorized as a [NPC] that is destined to die before the story even began?! "I just want to live a good life..." Sei sighed. Becoming a nobody that can die anytime doesn't make sense to her, but despite so, Sei decided to try her best to survive in this mundane world. Keeping it low-key and out of sights and maybe, in the end, she would be able to live the life of her dreams. Yet, why do certain people keep on bugging her? "What's wrong with you?" The brown-haired guy called out to her as she travels. "Where are you going?" A weed-head beauty refuses to let go of her. "I'm just an NPC! Why are you guys attaching yourself to me?!" She muttered out of irritation. This is a story of how an ex-sheltered-lady handles her life after being turned into a novel's side character. ------- A/N: I OWN THIS STORY. THIS STORY IS A WORK OF FICTION. NAMES, CHARACTERS, BUSINESSES, PLACES, EVENTS, AND INCIDENTS ARE EITHER THE PRODUCTS OF THE AUTHOR'S (ME) IMAGINATION OR USED IN A FICTITIOUS MANNER. ANY RESEMBLANCE TO ACTUAL PERSONS OR EVENTS IS PURELY COINCIDENTAL.