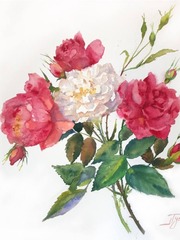 The white rose in a sea of reds

In a sea of red roses there will always be one white one desperate to stand out but what happens when they only need red roses? This was a common saying in the land of Eadra. People in this world would recieve flowers markings that show their personalities and create abilities. Amani who was born as the first royal princess of Eadra with her younger twin Adela life was tough. She had bad relationships with her parents while on the other hand her sister had a great relationship with them. Being the exact opposite of her sister Amani often felt insecure but as she is about to enter the institute of flowers everything will change.