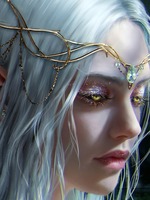 The Unrequited Requiem of the Forgotten.

What is The Unrequited Requiem of the Forgotten.

The Unrequited Requiem of the Forgotten. is a popular web novel written by the author Undercover_Ostrich, covering ACTION, ADVENTURE, COMEDY, TRAGEDY, PSYCHOLOGICAL, GUILDS, SLOWROMANCE, QUESTS, CHARACTER PROGRESSION, Fantasy Romance genres. It's viewed by 15.1K readers with an average rating of 0/5 and 1 reviews. The novel is being serialized to 15 chapters, new chapters will be published in Webnovel with all rights reserved.

In a world of legends, guilds, and magic, where the weak are forgotten while the strong are worshipped. Kaira, a girl who seemingly fell from the sky, has lived her life with no recollection of her memories before the age of six. Now, nine years later, Sienna, the woman who raised and trained her as if she were her own child suddenly threatens to kick her out because she is in 'desperate need of retirement'. What's the next surprise the universe has instore for Kaira?