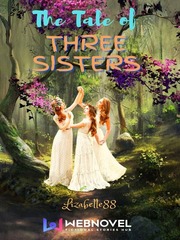 The Tale of Three Sisters

One day, Ivy, the eldest of the three sisters bid goodbye to her aunt and siblings. She's going to work in the mysterious castle at the top of the hills as a housekeeper, promising them that she'll come home for a visit once a month. A month passed. Two months passed. Ivy never paid them a visit. Worried to death, Kate went to the castle to check on her sister. She promised to return three days later. However, she never returned. After one month of waiting and still, there's no sign of her sisters returning, Ella, the youngest of the three sisters was getting restless, she was consumed with a burning desire to investigate what happened to her beloved sisters? Hence, Ella sets forth on a journey to find her missing sisters. What she found and discovered inside the castle was simply...shocking and totally out of this world. For it's too late for her to know that once an outsiders step inside the castle they can never get out alive. Unless... ~~~~~~~~ *My Other Novel on this site* 1.) The CEO's Painted Skin ~ completed. 2.) The Last Embrace ~ completed. 3.) Sweet Surrender: The CEO's Second Wife ~ Ongoing.