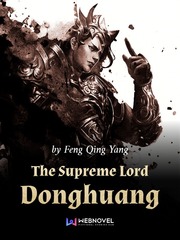 What is The Supreme Lord Donghuang

The Supreme Lord Donghuang is a popular web novel written by the author Feng Qing Yang, covering Eastern Fantasy genres. It's viewed by 1.9M readers with an average rating of 4.29/5 and 491 reviews. The novel is over and can be read all 327 chapters in Webnovel with all rights reserved.

Zhou Donghuang, a man from the Earth, is able to destroy any planet in the universe without lifting a finger. His supreme will can sweep across the vast cosmos in the blink of an eye. And his immortal spirit can depart from his body and wander around the universe! In Kunlun Mountains lies a circular slate, which brought him back to one thousand years ago...

This Earth Is A Bit Fearsome

Fury Towards The Burning Heaven