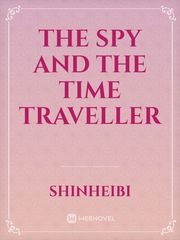 THE SPY AND THE TIME TRAVELLER

What is THE SPY AND THE TIME TRAVELLER

THE SPY AND THE TIME TRAVELLER is a popular web novel written by the author Kimino, covering ROMANCE, MODERN, SC-FI FANTASY FANTASY, Teen genres. It's viewed by 3.9K readers . The novel is being serialized to 10 chapters, new chapters will be published in Webnovel with all rights reserved.

Maliah is 21 years old countryside girls. She was usually a good girl but after she met her first love Sean, she has changed a lots. She met him at the college fresher festival of her graduation. Sean was also from the same hometown but he loves to travel around and he met new peoples from different areas. He is so extroverted which was definitely opposite to Maliah. From the first meeting, Sean always flirty around her and became his girlfriend. He changed her behaviour and made Maliah worried about a lots. It made Maliah clingy and anxious person. After they finished their graduation, Sean send the breakup text and hide from her. It was the first disaster for her life. She drop her grade and couldn't get into her dream university for Post-graduate. Every things turned into turn into despair and she became numb. She felt herself as a trash. She realised and regret her time spending unnecessarily on him after the breakup. One day she pray to God that if the God gave him the chance to go back at the past, she would definitely be in a relationship with another guy who would treat her better because she deserved better. Suddenly, she wake up in her 17 years old body. It was like a dream and god granted her prayer. At this moment, she tried to skipped the chance to Sean but she met Ryan at the torment incident. He save her. From that moment, Maliah want to be friend with him and gave him his kindness act again as he was the her savior. But she was transferred to another college by her parent. Luckily, Ryan was her classmate and they become friends day by day. But, Maliah didn't knew that Ryan was spy and to collect the data record by the Higher authority as the college was listed in the corruption list. Everything was successful happened in the past, before Maliah came to the past but she didn't get full information about the incident as she wasn't transferred to that college in the past. But Ryan was caught and framed as a fruad by the hired authority i.e. the government. Now, Maliah was the girl from future and Ryan was with him. As Maliah always tried to closed to Ryan, what will be the fate for Ryan as well as Maliah at this time... *ALL THE CHARACTERS AND INCIDENTS WERE FICTIONAL AND FANTASY. THEY ARE NOT RELATED WITH HISTORICAL NOR PRESENT INCIDENTS.*