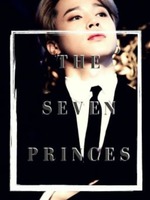 What is The Seven Princes || A BTS FANFICTION || BTS X READER

The Seven Princes || A BTS FANFICTION || BTS X READER is a popular web novel written by the author wassap_its_hunter, covering ROMANCE, ACTION, HARÉM, BTS, WEREWOLVES, WOLF, MATES, SOULMATES, READER, BTSXREADER, Fantasy Romance genres. It's viewed by 2.8K readers with an average rating of 0/5 and 1 reviews. The novel is being serialized to 10 chapters, new chapters will be published in Webnovel with all rights reserved.

"Are you all brothers?" You pointed at the men scattered around the room. They all nodded in their way. Others raised their eyebrows once, others send thumbs-up, and others nodded normally. You put two and two together and sighed out and groggily slumped back down the chair. The pain on your thigh that started to subside had returned in a flash but you gulped down the wince that almost forced it way out of your mouth. The closest people close to you reached out towards you, alarmed with how you sat down. "So, do you guys share the same mate?" You asked weakly. From your travels, you found out that those who have mythical blood running down their veins and are siblings and are the same gender would share one mate. It happens rarely, only to those who have royal blood. When you observed their situation, with their consent, of course, their mate would always turn out to be a human. Might the siblings be sirens or nymphs or vampires, their mate would always turn out to be Namjoon coughed and rubbed his nape. "That's actually the reason why you can't leave," He slowly let the words go. You closed your eyes for a moment. "Well, You should have told me that I'm staying for a chat," You grumbled out. Hoseok brightened up and clapped his hands. "Then we shall drink tea back at the house," He announced. - Being known as Nyx, you never had an easy life. With the expectations of being the world's best-renowned assassin and hunter, protector of your people, and a babysitter of five children, you can't really expect to have time in your hands to relax, the world being run by werewolves, witches, vampires, mermaids and more. But now, another role has been added. After hearing the princes of the biggest empire in the world, the Asian Kingdom, say the word "mate", you're scared for what is about to come. But then again you're Nyx, one of the very few humans that survived and became known, you could take a challenge like that.