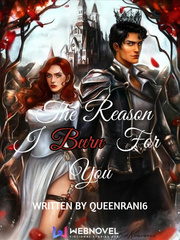 The Reason I Burn For You

What is The Reason I Burn For You

The Reason I Burn For You is a popular web novel written by the author QueenRani6, covering WEREWOLFVAMPIRE, ROMANCE, PACK, ACTION, FORBIDDENLOVE, WEREWOLF ALPHA, QUEENANDKING, Fantasy Romance genres. It's viewed by 60.9K readers with an average rating of 4.94/5 and 13 reviews. The novel is being serialized to 57 chapters, new chapters will be published in Webnovel with all rights reserved.

"Take my life, Tashina and I promise, I won't stop you" he assured with a bitter smile. She kept her blazing green eyes steady on him and without a second thought, she drove the dagger straight into his heart. _________________________________________ She was an opium flower, he became the chilled morning dew_ both were equally poisonous in love. An alpha no more than a moth, desiring her was a flickering fire. Beautiful, cruel fate meant to burn him and make her fade away. The steel blue soul penetrating orbs and an alpha true to his title with the hope of finding his mate faded since long. Loneliness eaten heart beating inside his desired outer then that fallen angel happened to step inside his territory. Oh! My bad. A fallen demon, she was destructively brave, a fierce rough vampire. Everything about her was forbidden yet inviting to his hardening heart. The fire she possessed was bound to burn him but he was willing to jump into that pit of hell that even Grim pitied him. A forbidden love tale of unfortunate lovers... The Reason I Burn for You #Edited by @Aysel_Inara

And It's All About You

The Celestial Saga : "The Awakening"