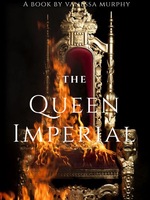 What is The Queen Imperial

The Queen Imperial is a popular web novel written by the author vanessamurphy15, covering ROMANCE, ACTION, R-18, REINCARNATION, MODERN, ROYALTY, TEEN-ADULT, ELITE, Teen genres. It's viewed by 3.8K readers with an average rating of 0/5 and 0 reviews. The novel is being serialized to 12 chapters, new chapters will be published in Webnovel with all rights reserved.

Paris Vurton and Anne-Marie Davis, two strangers with the same face but different lives are a product of the luna eclipse that was predicted hundreds of years ago to bring about the reformation of the Kingdom of Berton. Seventeen years later, Paris, the daughter of the Prime Minister of Berton and the Fiancée of the crowned prince, is involved in an accident on their engagement feast that puts her in a coma. Her father, Oliver is forced to make an abrupt decision to secure his ticket to the throne and only path into the royal family. He searches desperately for a way out and meets Anne-Marie, the seventeen year old orphan who looked exactly like his daughter but is nothing like her. Unlike Paris, Anne-Marie had lived her life at the bottom of the food chain, she had lost her parents to a disease and was on the verge of losing her brother too. Anne-Marie agrees to help the Vurtons commit treason against the throne and secure their position by pretending to be Paris until Paris returned from her treatment in exchange for her brother's life but things start to take an uneventful turn when Anne-Marie starts to get too attached to her role and wins the attention of the Prince that never used to care about the character she was impersonating. What would happen when Anne-Marie gets too comfortable with her new life and everything starts to blow up in her face? What would happen when the royal family finds out that a person of lowly birth had deceived them? Would the Vurtons take her side? What would happen when Paris returns to take her life back? What would happen when Anne-Marie finds out that in the game of politics, there are no stones left unturned and she had become a stone the Vurtons had to get rid of to maintain their balance? What would happen to Anne-Marie? Who would become the Queen?